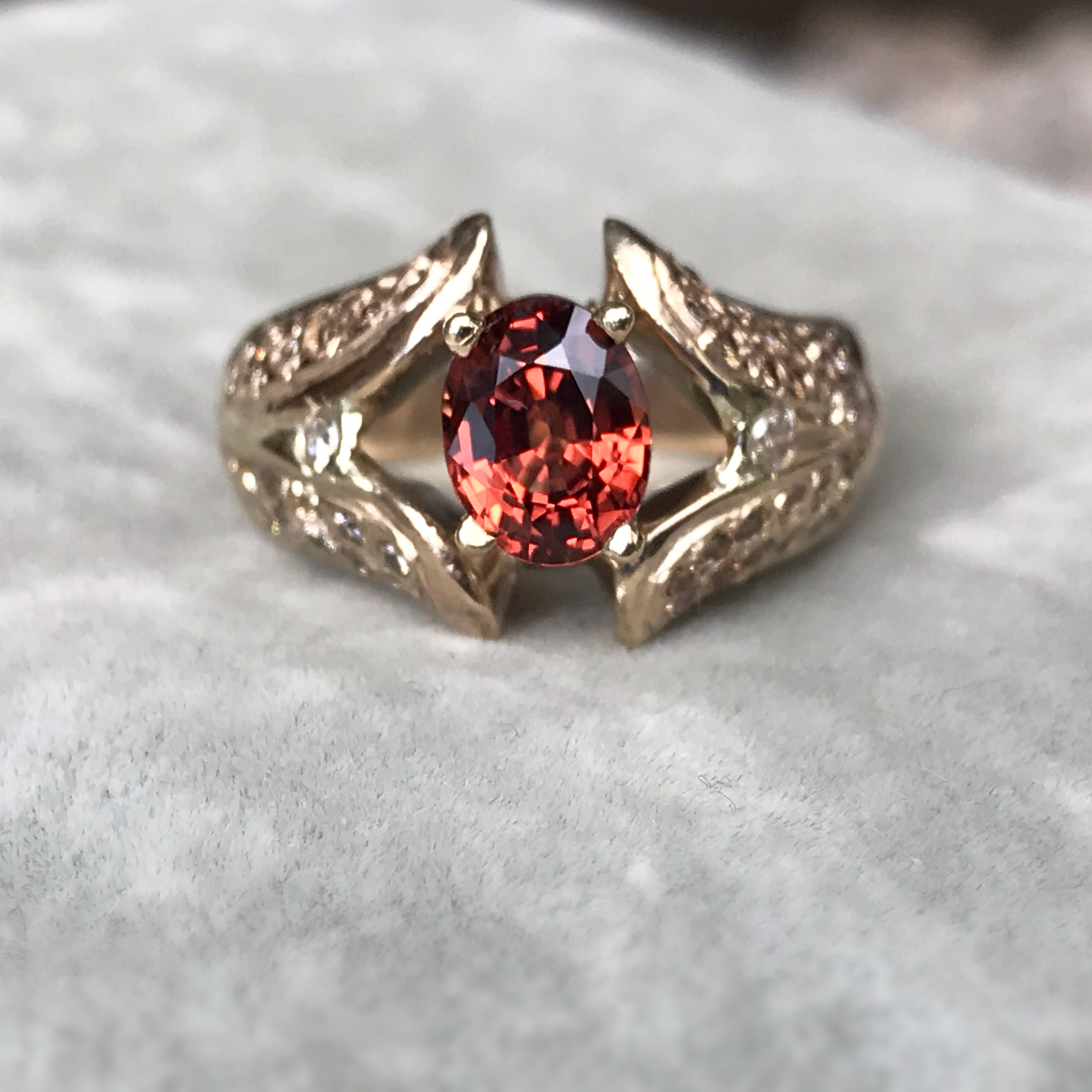 I have created engagement rings before, and I have created many works that pushed at the limits of what I thought was possible, but this ring is the crown jewel of breaking through barriers for me. A very beloved friend and fellow artist reached out wanting a truly special, truly one of a kind, spectacular engagement ring for his most beloved lady. He had an idea of what he wanted, and honestly, I thought there was no way I could make anything like it. In some ways, I was right… I did not yet possess the skillset necessary to make the ring. In other ways, I was so wrong to think it couldn’t be done. I had design skills, I had resources, I had a strong background in sourcing stones. I needed to play to my strengths, and ask for help where I needed help.

After brainstorming with our friend who commissioned the ring, we had a general idea of what we were doing. I set about sourcing the most incredible stones I could find for this ring (play to the strengths) and after much scouring, I found a Malaia Garnet that was nothing short of breathtaking and some very rich conjac/champagne diamonds to compliment the garnet.

Finding the perfect center stones and accent diamonds was exciting enough to propel me through the terror I was feeling. I reached out to my father in law, who shall hence forth be referred to as “Pops” and I told him I needed his amazing skill set to create this ring and do it justice.

Pops is a master jeweler of more than 50 years, and so we agreed that he would bring this ring to life and I would apprentice under him. The experience was both hugely educational for me and also fun.

Pops handcrafted every last little detail of this ring, and I watched in amazement, assisted him when he needed a tool or supply, wanted design input, or had something I needed to source to make the design completion happen. We started with a wax rendering of the band shape.

We had a few problem solving moments with the wax rendering. I don’t care how long you’ve been at your craft, you still have these “Ah, crap.” Moments. In addition to being a magician at the bench, pops is also an expert problem solver, and infinitely patient when it comes to reworking things. That, to me, is invaluable to witness.

We got the band shape just right and casted it in 14k gold (casting is endlessly cool to see and experience), and it came out beautiful. Pops went about setting the diamonds I had sourced… and I had no idea how absolutely tricky that process is. Setting tiny diamonds is not for the faint of heart. I acted as pop’s “diamond finder” when one went rogue, and watched him use the most delicate balance of force and gentleness I’ve ever seen in my life.

“How many times have you stabbed yourself in the thumb while setting diamonds?” I asked, after he stabbed himself in the thumb, cleaned it, and proceeded to keep on working. “Oh, I dunno… maybe 200 times.” he said. “It’s just like that.”

Rafi spent the time (over several days) helping pops by going outside and dragging debris away from our recent hurricane Sally (did I mention we had a hurricane during this ring creation process?), moving stuff around the workshop so pops could find things he needed and work more easily, and then sitting down to make improvements to our website in the final day of ring creation.

Pops worked late into the evening the final night, but when it was done I think we all agreed it was worth all the effort he put in, all the sourcing we did, all the design brainstorming and modifications. It was befitting of royalty.

Yeah, well… needless to say I put it on my finger immediately.

The entire experience was priceless for me, not only in working with my father in law (who is one of my favorite people of all time) but in learning so much and really widening my perspective of what is possible with patience, some tools, and some passion… and asking for help when you need it.

On the tools end, you know how it seems like you always need the newest, fanciest, most expensive tool to accomplish the project (according to the folks who want to sell you said tools)? Pops created the wax form of this ring and set all those stones with basic things every jeweler has at the bench. Files of various sizes, drill bits, burs, pliers, a variable speed flex shaft drill… and yes, he has the big machines for casting and polishing, and so on… but I’m talking about his ingenuity and resourcefulness at the bench. If he has a basic tool, he finds one million uses for it. If he needs a tool, he often makes it himself. It’s refreshing in a time where we can easily think “Well I can’t do it because I don’t have { fill in the blank}”.

“Rafael Perez Sr. has been handcrafting custom jewelry for more than 50 years, and he’s an absolute magician at the bench. There’s nothing this man can’t create, nothing he can’t figure out, everything he produces is incredible. It was so much fun, and such an honor to learn from him on this project, and I look forward to more.” ~Klee