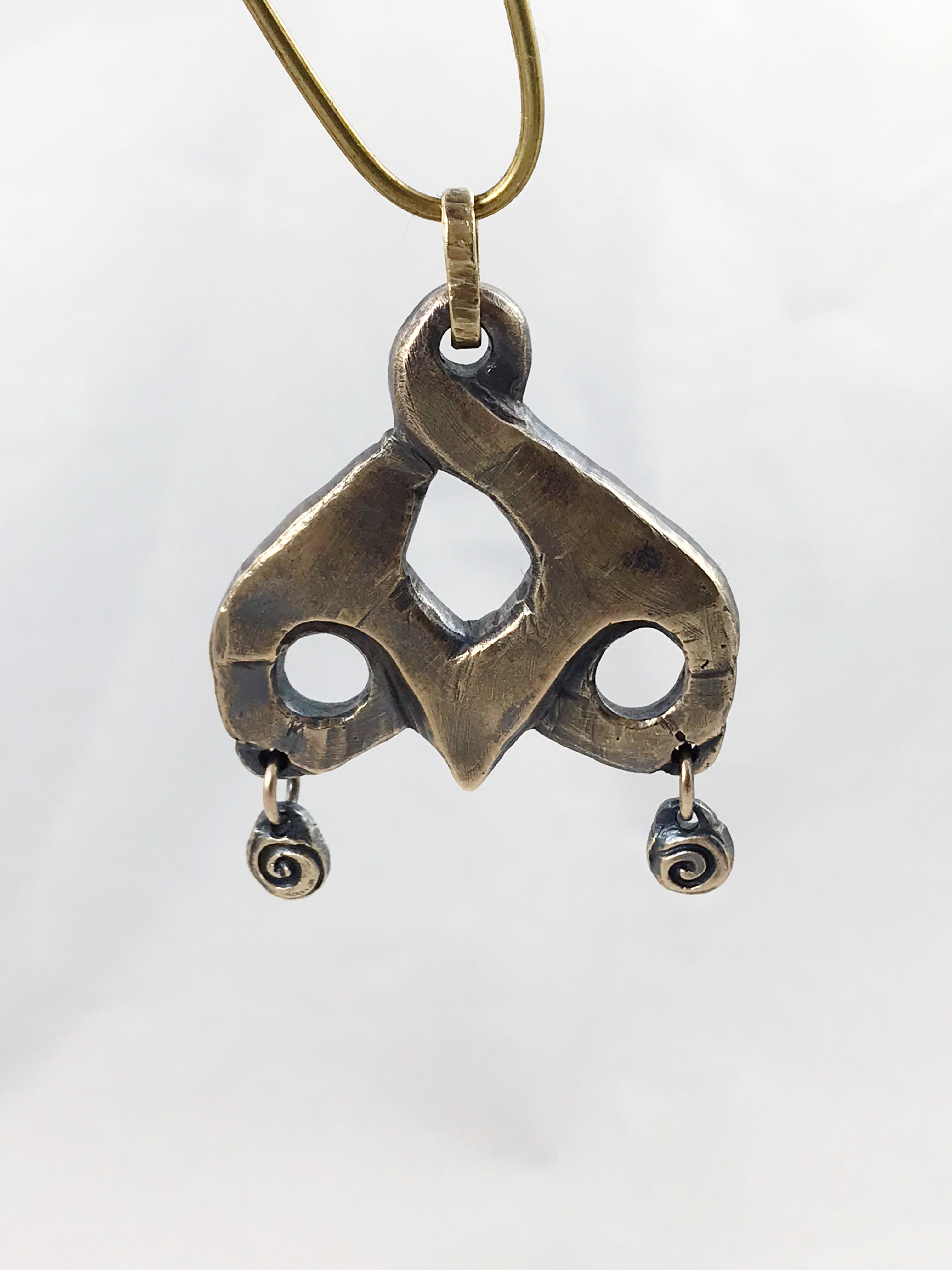 I was contacted in the spring of this crazy year we know as 2020, by a very talented artist and member of our artist community on the interwebs. He said he had a special project in mind, with a very personal and beautiful backstory, to be created for a friend, and I was the person he thought of to create it. The piece was to be an interpretation of a vintage pendant belonging to a very special mom, whom his friend had lost as a child. The pendant she wore had sentimental significance… only problem being, the only photo that existed of it was a very blurry pic from eras gone by. I was hooked, said yes immediately.

Only problem was, the only picture in existence was a blurry photo from eras gone by. No info about the pendant’s origins were to be found anywhere (we both did copious research). Also, I knew right away this was going to require my delving into the world of lost wax casting which I’d never done before (enter self doubt and insecurities). Fortunately the artist commissioning me to create it (did I mention he’s a ridiculously talented artist himself), produced a gorgeous and flawless digital rendering of what he thought the pendant might have looked like, and at least provided the silhouette we would be going for. The rendering was so beautiful (enter self doubt and insecurities) that I wasn’t sure I could do it justice.

I researched, I sketched, I scrapped, I researched more, I sketched, I scrapped. I realized I was going about things the wrong way. I was trying to recreate a “historical artifact” when I should have been emotionally interpreting the silhouette and feelings that the image and rendering evoked. I was given full permission to do so, I just wasn’t. I started over and produced a sketch that I felt represented the backstory and feelings of the pendant.

He loved it, resonated with it, and gave the green light to move forward. Then I just had to tackle the challenge of making this in wax and then casting it in bronze (enter self doubt and insecurity). It took me eons to figure out how to make this in wax, but I took it on one step at a time and after about a week, I had something!

I used the tools I had available (files and drill bits mostly) and I got there. I also learned a lot in the process (almost melted the top but didn’t, thank goodness…)

The theme was “Wholeness in Partnership, Wholeness in Self” and the artist/commissioner loved the narrative and the wax rendering. Now I just had to cast it in bronze (enter self doubt and insecurity). Fortunately for me, I had resources.

My father in law is a master jeweler of more than 50 years, and he was game to help me cast this pendant and show me the process. In his decades long career of casting, he’d never casted in bronze before (he’s a goldsmith), so we both had some learning curve but together we figured it out and had a lot of fun in the process.

Rafi was there to document, enjoy the moments, and move an antique Italian rolling mill (weighing at least a quarter ton) across an acre of yard into the workshop (using straps, a riding lawnmower, a winch, and brute force). He said “Yes, I’ll do grunt labor while you two create fine delicate pieces of jewelry, no problem.”

The pendant casted beautifully and I took it back to my studio, cleaned it up, assembled, soldered components, polished, and it was splendid. The artist who commissioned it was so happy to see it completed and so thrilled to give it to his friend. The friend whom it was for, was moved to tears, and that would have made the whole process worth it in of itself… but in addition, I learned lost wax casting, faced fears, spent time with Rafi and my father in law at his shop, and created something I’m very proud of.