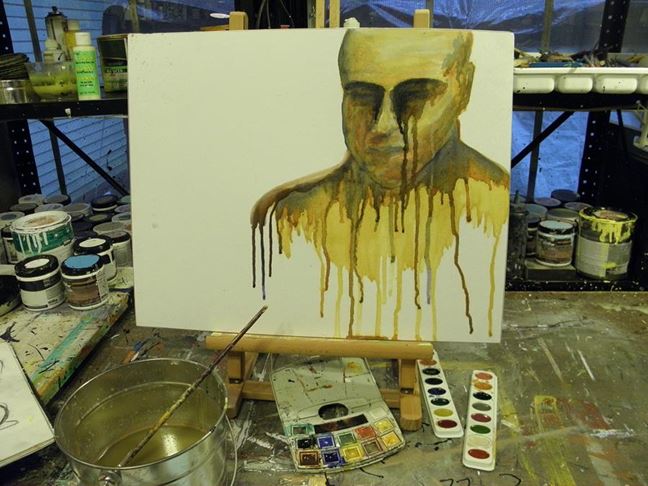 This morning I found myself contemplating my life and the different ways I have lived it. Since I am in the process of writing a book, I am looking at notes and different events in my life that lead me to this point. I am a very happy individual, but I also spent the majority of my life feeling trapped and unhappy.

Growing up, I was influenced by television shows, parents, friends, friends families, teachers, the weird neighbor with the giant hairy mole, and pretty much everything and everyone else in society. I was told that my airy-fairy ideas of becoming an artist, musician, or creative were a cute thing to hold onto as long as I was a child, but eventually I would have to grow out of it. The influences were subtle and mostly unspoken. Most tv shows that I loved involved the man having a job he hated to support his family, the wife stayed at home and took care of the kids, and that’s just how it was. Usually, the job sucked really bad, but the man took solace in the fact that his sacrifice was for his family.

I gotta tell you… that whole scenario of putting your dreams aside, working a job you hate and sacrificing your happiness for the greater good is a piece of crap-turd. First off, that sucks for the man. I was that man for 20 years, and I can tell you, it sucked pretty bad. Second, I wasn’t benefiting my children at all, if anything I was teaching them first hand the same bad influence I had growing up. Third, I started to secretly resent my family because I felt that my sacrifice was being taken for granted, and that slowly tore everything apart.

After that experience I realized that no one had a handle on happiness or what you should do with your life, just a plethora of opinions based on other peoples’ opinions, and the majority of those opinions were outdated crap. It wasn’t out-of-the-box-thinking-trailblazers telling me my dreams were impossible, these were people that had conformed to living a life like everyone else, and most of them weren’t feeling fulfilled or happy.

Listen, I’m not saying you have to work for yourself in order to be happy, you can have a job somewhere and be happy and feel fulfilled. Unfortunately, I think there are a lot of people that just settle for what they can get and ignore the yearning that comes from within, and in my opinion, that’s just misery. I think whether you pursue your own career or you work for someone else, it’s really all about how you choose to live; whether or not you are willing to blaze your own trail or simply conform to the status quo.

Blaze a trail:
Find a new path or method; begin a new undertaking. By extension, to be the first to do something, often that which is later emulated or built upon by others. Note: New trails or routes through forests were often marked by `blazing’ which involved making white marks called `blazes’ on tree trunks, usually by chipping off a piece of bark.

If there is anything that I pride myself on now, it is that I stubbornly do things my own way and continue to move forward despite the fact that I may have to pole vault over obstacles every once in a while.

That being said, if there are portions of the well-worn path that suit my needs, I don’t avoid them, but I make sure not to allow myself to get comfortable with the easiness of it.

One thing I can take away from these very unfinished thoughts that I’m sharing with you is this: No matter what, you have a choice. You get to decide how you are going to live your life. Some people may be disappointed by your decisions, and they may even get angry at you… some may never talk to you again. Most people will come around eventually, and they’ll say things like “I always believed in you and knew you could do it” despite what they may have said in the beginning.

I think that no matter what, it is always worth looking at your life and answering one question… if I was on my deathbed right now, would I have any regrets?

4 thoughts on “Morning Thoughts On Blazing A Trail”