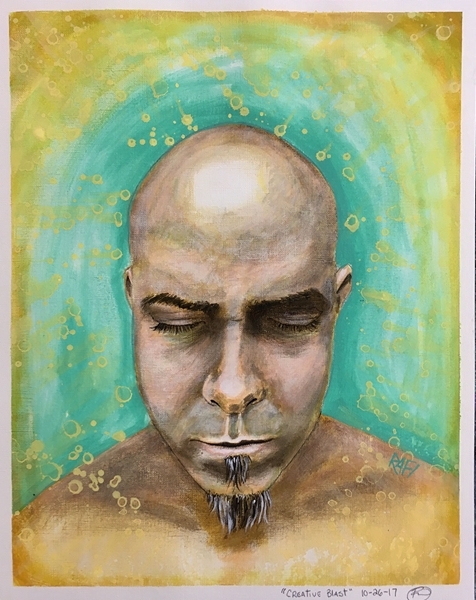 Not well sometimes… but I’ve got some tricks up my sleeve that have helped me get better and better at dealing with poo flinging critics.

I think it is a necessary plight that one will have to get used to when you are putting yourself out there. I am an artist who creates art, music, writing, YouTube videos, and puts them all out there for the world to see… I get a lot of negative criticism.

Comparatively speaking, I mostly get a lot of beautiful comments on my creations. We have a following of some of the most amazing humans I have ever had the pleasure of interacting with.

Yet, negative comments can still throw me off kilter, despite the overwhelming positivity I experience in the world. It’s almost like a temporary reminder that the world isn’t such a wonderful place… and there is an a-hole around every corner, just waiting to jump out and say you suck.

I want to be clear about something, I’m not talking about constructive criticism. Listen, sometimes even a helpful criticism can be hard to hear, and our first response may be to run away flailing our arms helplessly, but sometimes it’s valid. Follow the source and stop for a moment, get off your high horse and check to see if it is valid and constructive. If not, then we are talking about destructive criticism. If the criticism is constructive, then it’s intended to guide you and to help you improve as a person, not to bring you down and make you feel inadequate.

If the criticism is completely invalid, totally off, and only meant to hurt you, then that’s what I’m talking about here.

So what do I do when someone is all “blah blah blah you suck Rafi blah blah blah!” I Don’t take it personally. It takes a miserable person to try and make themselves feel better by giving some misery to someone else… don’t take it, it’s not yours, and it doesn’t belong to you. Understand that people who are in pain say really hurtful things, especially people that may know which buttons to press. Think about a time where you may have said something terrible to someone. Were you in your right mind? Were you in pain? Were you feeling like a victim? Some people live there in that place… don’t take it personally, unless you wanna visit and stay a while.

Understand that it’s your buttons. Why is it that one person can be called ugly and not even react a little, but someone else will blow a gasket? It’s because we all have our own little triggers based on our own insecurities. So if someone says something and it bothers you, take a look and see if you can identify the insecurity or doubt behind the emotion. In my opinion, when someone says something mean and you know beyond a shadow of a doubt that they are full of crap, you hardly even react, but if they touch on something that pushes on an insecurity it can be devastating. Just remember, they are your buttons. Figure out what’s behind it and sort it out.

Keep doing what you’re doing. Are you going to stop being who you are simply because someone spewed some garbage at you? Of course not. If the criticism has no basis whatsoever, then the best thing you can do is to ignore it completely.

Listen, people talk shit all the time because they are not putting themselves out there in the muck, sweating, bleeding and enduring the terrifyingly exhilarating ride that is fulfilling your dreams. They are going to say you can’t sing, you can’t paint, you’re not funny, you’re are not good enough, and everything else that they can say to destroy your hope and get you to stop. Don’t EVER let someone who is not putting themselves out there in the muck discourage you from going all the way. If they are not doing it themselves, and facing critics of their own, then they have no right to talk.

Don’t feel bad if you’re not able to push all of the negative words aside right away. It takes practice to work it out and get to a place where it’s no thing… But you got this.