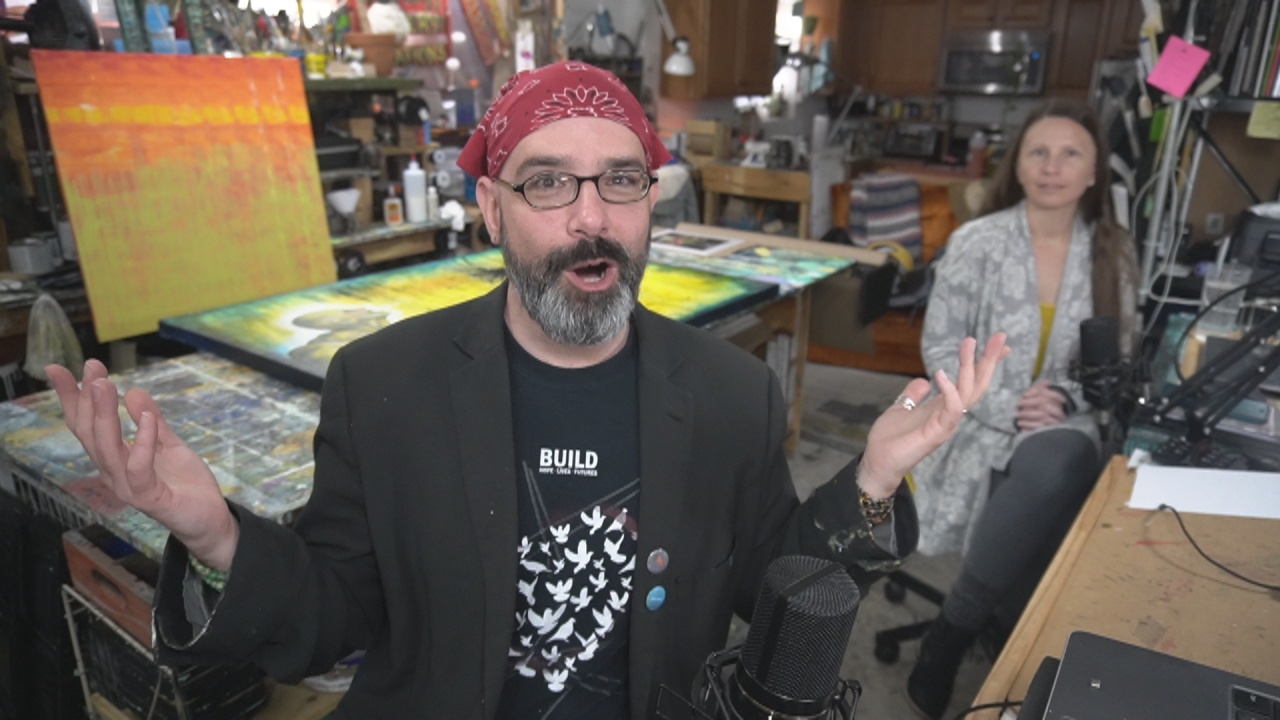 Some of you do, and you have asked me how I do it, so in this blog I am going to list the programs and equipment I use to make videos. To be clear, any of you that have watched our videos know that we do not record the highest quality artistic stuff. In fact we spend most of our time talking into the camera, answering questions from artists all over the world.

So Let’s get into it… Just a warning, if you are not interested in doing videos, this post may be a snooze fest for you. I will add some inspiring tidbits here and there so don’t get discouraged, I got you. By the way, we have collected this stuff over the last ten years, but as I said, we started with the camera phone and a discontinued app for editing that sucked.

The program I use and have used for years is Vegas Pro, which used to be made by Sony back in the day when I started making fun horror films with my kids. It is an EXPENSIVE program, but I have always found good deals online. The outdated version of Vegas Pro that I use now and refuse to get rid of I got for $60 from HumbleBundle.com The regular price is more like $600… look for deals.

Now, I am sure that there is other editing software out there that is way cheaper, but Vegas is so easy to use that it is worth the investment to me. Obviously, everything has a learning curve where you dick around with a program and create crap, but it is so easy to use that I tend to always come back to Vegas. Keep in mind, I do not have a Mac, or I would probably be using Final Cut Pro… I feel like Vegas is the Final Cut for windows.

Someone I know was trying to use Adobe… Adobe is great for special effects, but a pain in the ass for simple video editing, it’s just less drag and drop… So I recommend Vegas. BTW, I am not sponsored or making any money from them, I just really dig the program.

2. Cameras I Use Are Sony, Canon, And GoPro (also not sponsored)

Before I get started here I just want to make it clear that the first 6 years of filming YouTube videos, I used our iPhone. I think anything you want to do with video, you can probably do with a camera phone. That being said, transferring files was a giant pain in my ass. So, I got cameras with SD cards to make my life easier. Just to be clear, I don’t know jack about cameras, so take my advice with a grain of salt.

I got this camera with a vlogging kit that came with a microphone. By the time I decided to get a camera, the idea of having a microphone input was super important. The video quality on this camera is amazing and it has a touch screen LED which makes focusing on my face super easy. I still don’t really know how to use it, but this is the camera that we use around the studio when Klee and I talk about whatever silly things we are talking about.

This camera is about $649 so it’s not cheap, but it is not as expensive as most cameras of this quality.

Years later we got this camera because the LED screen is on top of the camera so we can look at ourselves while talking and not look awkwardly away to check how we look. This camera also connects to the microphone. This is a more expensive camera and I’ll be honest, I’m still getting the hang of learning the settings. We look weirdly yellow whenever I film us with this one, but chances are it’s my fault.

This camera is about $796, which is not terrible, but it is not cheap.

So I had this little cheap “made in china” camera that was supposed to be like a GOPRO that I spent $70 on. I’ll be honest, just get the GOPRO. Although the sound and video quality are not as good as the cameras listed above, they’re not meant to be. It is an action camera that is really easy to use. I use this camera for time lapse and for out and about filming where I can just throw the camera around. Honestly, I would probably be fine with just this camera if I could figure out better sound. It’s also small and easy to take around with you and control from your phone.

3. Microphone I Use For In Studio Cameras (again, not sponsored)

So for the longest time our sound was so shitty that no one even noticed all that much how shitty it was… probably because it was fine, but for some reason we decided we needed microphones which we still are not sure how to use.

This shotgun condenser mic is so awesome because all you do is plug it into the camera and it works beautifully. The only issue is that if you have ALL the wireless things like laptops, printers, and phones, it might pick up the signal and do this weird vibrating sound while you are talking. When we use this mic, we have a sweet spot in the studio where it doesn’t make weird sound. That being said, this mic is awesome for recording directional, which means it records in the direction it is facing so you don’t get too much of the other sounds in the area… which is great.

There are some different Rode mics out there and we own a few, but they are all different and do different things, so I’m not going to list the other ones that we own. I will say the more expensive ones do not pick up interference.

4. Sound Editing (and finally, not sponsored)

I use Audacity, which is an open source and free download for sound editing. It has noise reduction and all the bells and whistles. Even though Klee owns a bunch of expensive software for music editing, I find that audacity is pretty awesome… and I know how to use it. (Secretly, Klee uses Audacity the most too.) There is a learning curve, but once you get it you can play around and learn pretty easily.

So that’s it, as far as what I use for video production. There are other things like cheap diffuser socks that you can put on your lights and stuff and obviously our podcast microphones. We have all the equipment we use in the studio for our music, video and art listed on our Affiliates page (CLICK HERE) where we can make that mulla (more like chulla-change) if you purchase it from amazon.

To be honest with you, a camera phone, some free app that you know how to use for editing video, and a wifi connection is all you need to post to YouTube and make it look awesome, but eventually you may want to get the stuffs.

Hope my list helps as far as what we use. Let me know what you use, or what you know of that is way easier than the crap I’m doing.