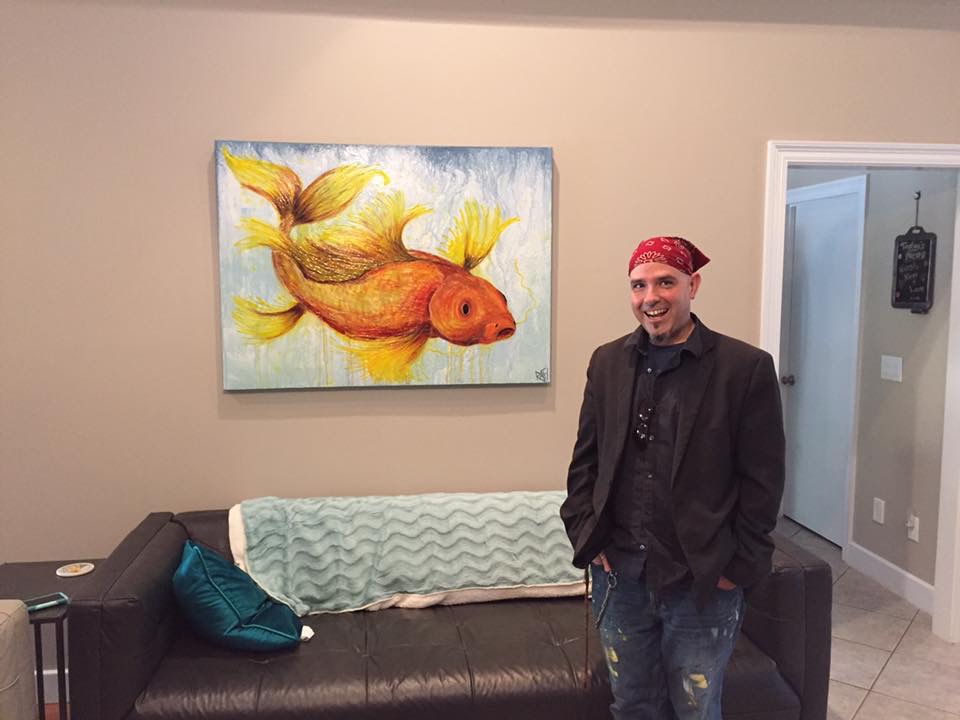 Recently, I had the opportunity to create a custom commission of a series that has a very strong meaning for me. It symbolizes, joy, hope, never giving up on who you are, and following your own path, no matter how difficult.

Here is the story:

When I was in my twenties, I had made a series of decisions that put me at a crossroad in my life. I had just told my father that I did not want to follow in his footsteps, that I wanted no part of the family business. It was a bitter and heated argument, which ended with me saying he could stick said family business up an orifice located at the rear of the human body.

I stormed out, jumped in my car and just drove. I had nowhere to go, the decision to leave meant I was leaving it all. I no longer had a place to live, I had no job, I had nothing.

I decided to go to a fountain that sat right on the Chicago River, I went there a lot when I wanted to be alone with my thoughts. It’s a beautiful fountain that was hidden on a lonely road behind North Pier, and I felt like it was my secret place in the city.

The Nicholas J. Melas Centennial Fountain and water canon shoots a stream of water across the river every hour, and the fountain itself has elaborate steps for the water to cascade and surround you. It is beautiful, and rarely did I see many people around, it was usually just me and my fountain.

There was no cascading water, or shooting stream that night. It was unseasonably cold that day, and I guessed the fountain was shut down for the winter. The cold wind bit through my sweater, and I rested my hands on the icy railing and looked into the vast darkness of the Chicago River.

Warm tears burned my cheeks as the realization hit me that I was alone. Truly alone.

Should I go back and apologize? Just go back to the life I knew? I mean, most people are miserable, maybe that’s how it’s supposed to be.

No, there has to be more out there, more to life.

I was shaking now, wondering if I could sneak into the house to get my coat. My dad wouldn’t care, he would give me his coat off his back, despite what I had said, but I was making a stand. I would die before I went back.

Hours passed, I stared at that dark abyss lost in my thoughts. I fell into a deep despair. I felt such hopelessness, I wasn’t really sure what I was going to do. I couldn’t seem to pull my mind away from the downward spiral I was in. Then, against my better judgment, I contemplated jumping into the dark water. My eyes blurred with tears as I stared out into the cold dark water.

In the darkness, I saw a glint of gold. I stood up straight, wiped my eyes, and strained to see what was floating in the water. I looked for a few minutes and saw nothing but black water.

Then a brilliant flash of gold from under the surface of the water radiated out towards me, then it was gone. One moment it would be there, the next moment it was gone. This happened for the next hour or so, although it felt like minutes to me.

What was this glowing thing? This small golden light that shone so bright in the vast darkness.

Was it hope? Like a candle flame, lighting the way. Even the smallest, dimmest light can shine bright in the darkness.

Suddenly, I felt alive. I felt like only opportunities were ahead of me, like I couldn’t be stopped… Especially, not by despair.

Then for a brief moment, I saw what had been playing with me in the water. It was a fish, a brilliantly golden fish, a very large goldfish or Koi… Then, just like that, it was gone. I didn’t see the golden flash any more that night, and I didn’t need to.

My series, “The Joy Of Koi” is based on this story.