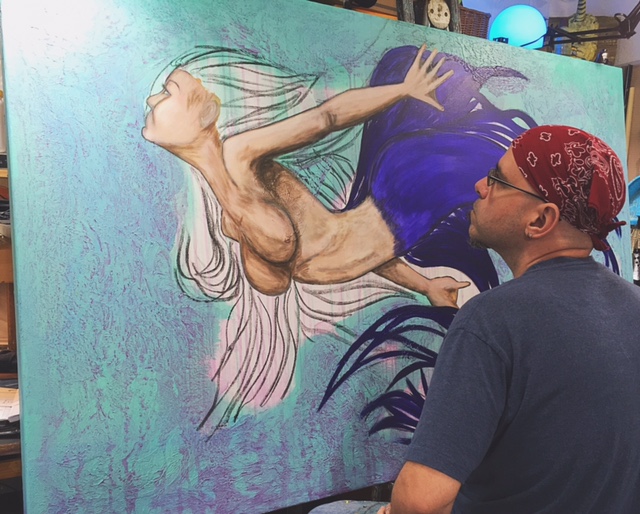 This question pops up often, or maybe I just notice it more because I’m an artist now. I’m always interested to see how people answer this question and am usually surprised by the many answers.

Usually, art is considered the process of deliberately arranging elements in a way that appeals to the senses or emotions. That way it can encompass a diverse range of activities, creations and ways of expression, including music, literature, film, dance, sculpture, jewelry and paintings. I kind of like this as a definition but I believe it’s a little simpler than that. Also, sometimes the arrangement isn’t all that pleasing to the senses and the piece could still be a beautiful work of art.

Some will argue that art cannot be defined. As an artist, I think this concept is a little hard to follow considering it would mean that I have a career in a field of undefined products. It’s just a little too scattered for me, although I agree that the definition of art could be different in each artist’s interpretation.

Art is also considered an activity or product done by people with a communicative or aesthetic purpose—something that expresses an idea, an emotion or, more generally, a world view. I can dig this, but I think it over complicates the meaning of art to need a large world changing purpose. It’s one of the reasons that some very popular artists within their collectors are not popular in the museum scene.

I don’t know, the fact of the matter is that Art historians and philosophers of art have long had classification disputes about art regarding whether a particular cultural form or piece of work should be classified as art.

The definition of art is open, subjective, debatable. The truth of the matter is that no one really has a definition, just a bunch of opinions. People will continue to have opinions about what is art and what is not art because there is no one way of looking at a piece of art.

I’ve seen some installations that look like someone just threw a bunch of garbage in a corner, which causes me to scratch my head. I can say “That’s not art, it’s just a bunch of garbage.” MOMA would say “It is the artists representation of our culture and wastefulness.” Who’s right? Me or MOMA? Some people would say MOMA is an expert establishment so it must be art. Others that love my art would say Rafi is an artist so he must know what art is. People that don’t care would say it’s garbage, but then again those people could look at a Picasso or a Jackson Pollock and say that is garbage.

Honestly, I think it doesn’t really matter. If people connect to the meaning of something on some level, and they consider it a work of art, then who’s to say it’s not. I won’t be putting any deliberate garbage installations in my house any time soon, although my father has a few of his own installations in our yard. Truthfully, once a pile of garbage had a deliberate purpose and placement, it did make me think a little, so maybe, just maybe I can think it’s art.

That being said, I think everyone will either find value in something someone created or not. Whether or not something is considered art by the masses is not important. I think the important thing to remember is that no one can tell you what is or isn’t art. If you like something and you want to display it proudly in your house, then it is art. Simple as that… Of course that’s my opinion.