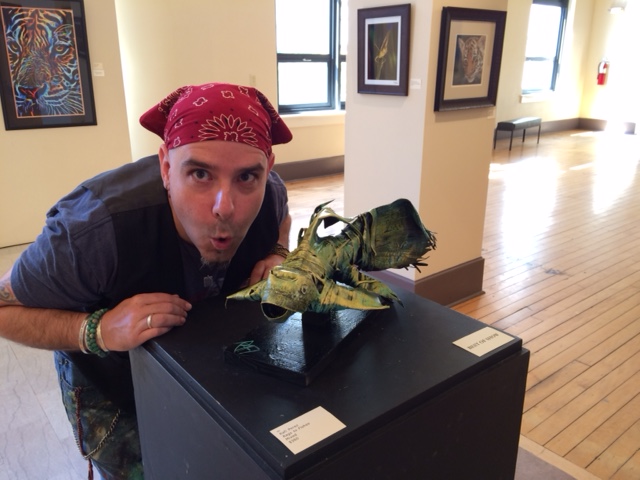 Opening reception for “It’s a zoo in here” at Artel Gallery was last night. In preparation for the show, I changed my clothes about a hundred times. I finally settled for the first thing I had picked out, and headed out to mingle with the art crowd of Pensacola. Last night I had the opportunity to face another fear. Fear of recognition for winning best of show.

I know what you’re thinking, “Really dude, fear of being recognized for winning best of show?”

Yup… It seems pretty interesting to me that I have these hidden fears, that really don’t make much sense, but I can feel them just the same.

I walked in with Klee, and my good friends, Monica and James, they were all my backup in case I started hyperventilating or something.

When we arrived we were given raffle tickets and welcomed to the show.

Immediately, I was pulled into a conversation with someone who had seen my videos about facing my fear of entering the competition. It was an intriguing conversation about facing fears, and about the caveman instincts that bring those fears up to the surface.

Then, I was asked if I wanted to take a picture with my piece, and I did. Then, I was surrounded by a mob of people, asking about the piece, asking about my history, or simply catching up. People that I adore, that I haven’t seen in a while, and new people that I was meeting for the first time. It pretty much went like that for most of the evening… It was awesome.

At least, until they announced the winners. I had won best of show, so I was announced last. There was a thunderous applause, and I wanted to hide, which I successfully did… until Susanne, who was making the announcements said “Where is he, is he here?”

All eyes landed on me, I half waved and probably turned beet red.

Then, it was over. On to the next thing.

They called out the numbers to the raffle, and my friend Monica won chocolate… to which I exclaimed “I never win anything.”

All in all, it was an awesome experience, and one that I hope to have again and again.

If you are in Pensacola, and you want to check out the show, it will be running at The Artel Gallery  October 4 – October 28, 2016.

2 thoughts on “It’s a zoo in here – Artel Gallery”

Follow Rafi
Follow Klee
Subscribe To Rafi's Blog Of Creative Inspiration
Join 3,626 other subscribers
Join The Rogue Artist NewsletterStay up to date on what we are up to, upcoming sales, events, offers, new art and jewelry, music, books and more. Everything!

We are currently updating our website and improving it. Please stay tuned. Dismiss