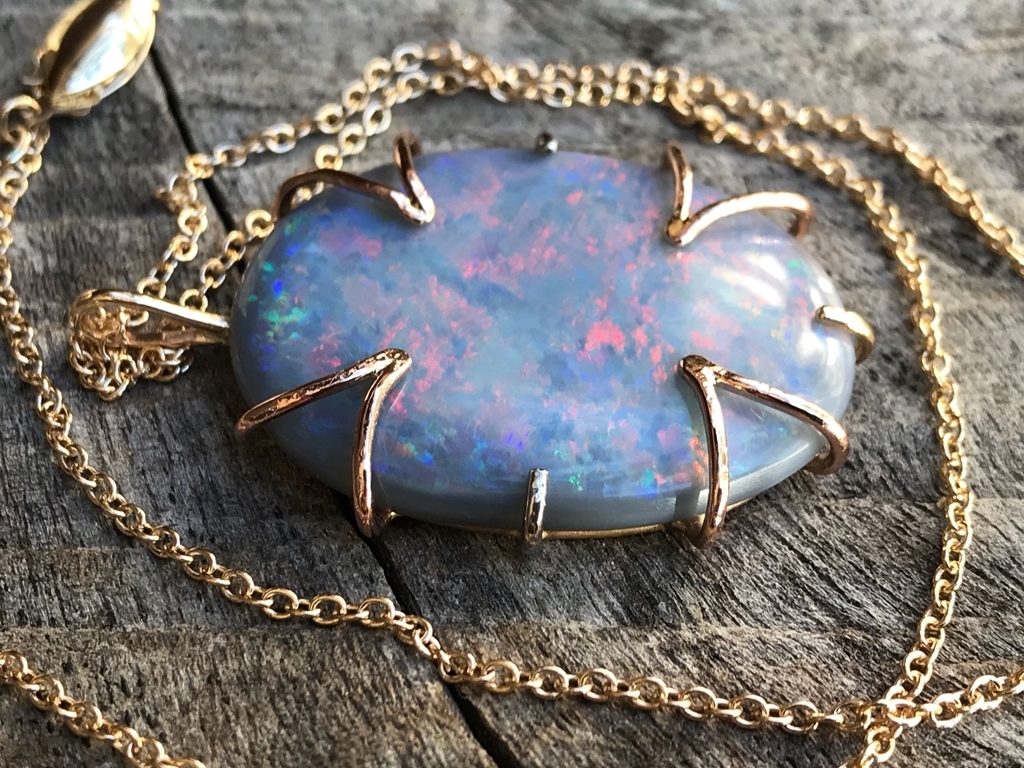 Recently I was presented with an exciting and challenging commission that I could not say no to, even though I was admittedly somewhat reluctant to take it on. Reluctant because, well, it was centered around the largest and most beautiful opal I have ever had the privilege of holding in my hands.

Proposed by two collectors of my work who have not only become good friends of mine over the years, but who continuously support and believe in me as an artist, always pushing me ever further into the realm of “Sure, I think I can do that.” They had purchased an astoundingly gorgeous Australian Lightning Ridge Semi-Black Opal from a local lapidary artist, who is also a friend of mine and an expert at his craft. The cut opal weighed in at 24 carats and measured 34x27mm, originally intended to be cut into two or three separate opals but was too magnificent to be separated into smaller pieces.

Immediately following the purchase of the opal they brought it to me, placed it in my hand and said “You know you’re the one we’re commissioning to make a necklace with this, right?” To which I replied “Uh… sure! Wait… are you sure?? I can’t believe this opal! Yes, sure! I’m honored and terrified to be the one to work with it!” and the commission had begun.

Anyone who has ever owned or held an opal knows that you can break them by just looking at them the wrong way. How can something so pristine, with such a delicate composition, contain so much life and color that it appears to have the very fire of creation itself within it?

Everyone involved, especially me, knew it was going to take some time to create this piece. They wanted it created in solid gold and they wanted something that had never been seen before, something to truly do the opal justice. We bounced ideas back and forth for weeks, some playing it safe, some really outside the box, until we landed on the concept of fire. “Our son mentioned that flames might be awesome, is it doable?” they asked.

I honestly wasn’t sure it was doable, but in the spirit of going with inspired thought, I expanded on the idea and rendered a sketch of layers of flames in yellow, white, and rose gold, and presented it to them (along with a few other “safer” design layouts) to see what they thought. To my excitement and horror, they loved the not safe, totally daunting, tri-tone gold flame layer design. I loved it too. We all knew it was the one. Now I just had to actually make this thing… in solid gold… no pressure.

It could not be rendered in wax and cast, it had to be completely hand fabricated because of the three types of gold that would be used. The flames were so organic in shape, so free flowing that anything other than just jumping in with both feet and going for it would not have produced the desired look. So, I went for it… in sterling silver (I’m not THAT crazy folks!)

I built a prototype piece in sterling silver to make sure that the design actually worked, would protect the opal, and would look as amazing as I hoped it would. It was many hours of successes, setbacks, design tweaks, small challenges, inching forward until the prototype was finished. I presented it to them and they were thrilled with it. Then it was time to make the actual piece in gold.

Thank goodness for the prototype, it allowed me to work everything out beforehand and create a piece in gold that I was beyond happy with. Organic shaped yellow, white, and rose gold flame layers, carefully built section by section to form the back setting for the stone. Rose gold “Flame Petals” as I call them, and yellow and white gold prongs to wrap gingerly around the sides and front of the opal to hold it securely and complete the design.

Once it was built, I set the opal in the design, more slowly and carefully than I’ve ever done anything in my whole life, looked at it, went into slight shock that it was finished, and then screamed joyfully at Rafi that it was completed and I had done it!

Throughout the whole process, I had been referring to the piece as the “Fire Flower” (a working title) to try to describe something that embodies an intense amount of light, passion and fire, and is simultaneously impossibly pristine, serene, and delicate. It described the opal as best as words can, and it described the design of the piece that would complete and represent it. I feel it also describes the beautiful woman it was commissioned for, and there’s a bit of myself represented in there as well. We all resonated with the feeling and the name “Fire Flower” stuck as the official name of the piece.

It was the most challenging and thrilling commission I’ve had thus far, and also the longest running commission, ongoing for about six months from concept to completion. I have to thank my collectors and friends Dina and Kelly, and their son Kyle for the challenge, and the trust that made it possible to create something I would have previously never thought possible.

I am now refining the Sterling silver prototype I had created, in which I will set a Nuummite stone, and will belong to them as well. The silver counterpart to the Fire Flower.