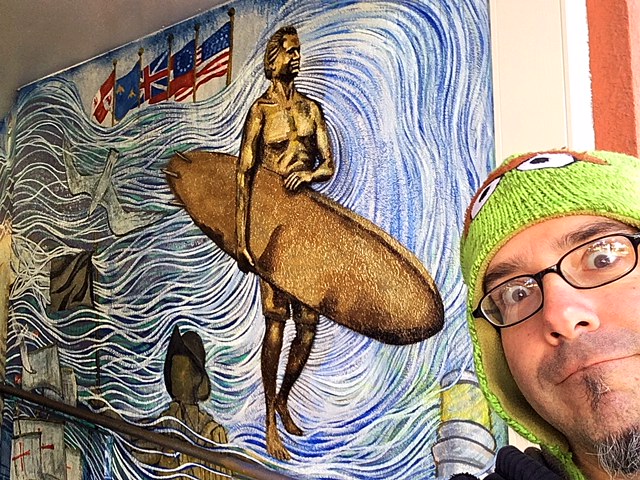 I made a change recently to my mural in downtown Pensacola. Although you would think that someone asking me to change my artwork would be offensive, in this case I was honored.

If you remember correctly, I created a large Pensacola mural at 114 Palafox place, which was Marty Campbell Gallery. I wanted to create something that would make people proud of this beautiful place that I’ve fallen in love with.

Originally, I had a multicultural woman’s face as a representation of the diverse culture here.

When Marty moved his gallery back out to Gulf Breeze, I wasn’t sure what was going to happen to the mural. I knew that the property owner loved the mural and would attempt to protect it. She would also need to make her new tenants happy, and if they didn’t like the mural, there was a good chance it would get painted over.

Then, Innerlight Surf Shop moved in, and they loved the mural, but wanted to make one change. They wanted to add Yancy Spencer III. After a beautiful and heartfelt conversation with Lydia (The Late Yancy’s wife), I decided to do it, and it needed to be perfect.

Now, I’m not sure if you know this, but Yancy is regarded as the father of Gulf Coast surfing. Not only that, but he was an amazing human, so I was honored to make the changes.

I know some people, may be upset that I changed an aspect of my original mural, but trust me, I am so thrilled to have painted a legend.

Recently someone asked me:

“hey, did you ever finish that mural you were working on downtown?”

“Yes… Kinda… Well, I still have to varnish it.”

The mural is officially finished, and ready for your viewing pleasure, but I have to put the protective coating on it. I was going to wait until it got a bit cooler, but based on a recent text message I received, I think I’ll do it next week.

This is kinda how the message went:

James: Hey, I think someone kissed the mural.

James: No, I mean someone put lipstick on the mural.

Now, I’m not worried about a little lipstick, in fact I’m kind of honored that someone would press their lips to my mural in adoration… but I should probably protect it sooner than later.

So, I’ll be out there around 10am on Friday, October 14th and rolling on the protective layer. The thing I am most looking forward to is the change in contrast that takes place when you varnish something. Deep colors get deeper, and light colors seem to glow, let’s just say, it’s going to look amazing.

To all my peeps in Pensacola, come see it after that date, it should be pretty amazeballs. To all my awesome interweb folks, I’ll take pictures.

I explain my reasoning behind the mural in this video, enjoy:

To view pictures of the mural process Click HERE

Thank you so much! You are awesome!