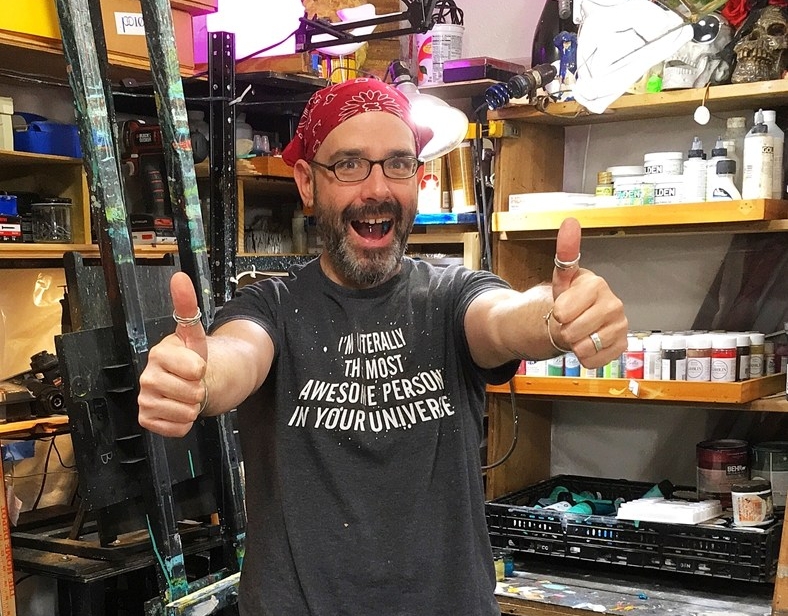 As I approached the gallery I found myself wondering how in the world I was going to get the massive sculpture I constructed up the stairs. I had somehow managed to squeeze it into my car without damaging it, which I attributed to dumb luck.

Luck seemed to be on my side that morning, considering I had pulled into a parking spot right in front of the shiny and unending staircase into the gallery.

I’ve entered the juried art competitions at Artel Gallery a handful of times with varying results. I still remember the first piece I entered, which was rejected with no particular pomp and circumstance. It was laid off to the side with the other rejects waiting for me to glumly collect it, like picking up a child from detention.

That rejection had a devastating impact on my self esteem as an artist for some time. I had just started selling my art and gaining some traction with local collectors, and it caused me to feel like I wasn’t good enough to continue masquerading as an artist.

It wasn’t until several years later that I decided to enter another piece, which didn’t get rejected.

The marble steps to the gallery blazed white in the hot sun, daring me to make a move. I had managed to get the sculpture out of the car without damaging it, knocking myself in the head only once.

The only idea that my mind could seem to muster that morning was to pick up the sculpture and maneuver the stairs as quickly as possible. The sculpture isn’t necessarily heavy, it’s just awkward to carry around, because like most sculptures, I didn’t design it to be carried around.

I prepared myself at the bottom of the mountainous stairs, glanced around to make sure no one was watching, and steadied my breath. One false move and all the work and effort that went into my art would be laying in pieces on the forbidding marble steps.

After deciding to enter my art again, I got pieces into four separate shows, won best of show, and had a solo show in their alcove. I also got rejected two more times, but it didn’t have an impact on my self esteem as an artist. Some might attribute the lack of feeling dejected to the fact that I had a couple years as a career artist under my belt, but I know plenty of seasoned artists who have a difficult time with any rejection.

I don’t have difficulty with rejection because after two years of avoiding art competitions, I finally realized that you can’t win if you don’t enter; and your art is not being rejected, it simply didn’t match the taste of the juror. The thing is, that art competitions don’t matter, but if you want to win one, you are going to have to face rejection. In fact, if you want to do anything awesome or important with your art career, you are probably going to face a lot of rejection and criticism.

If you want to be safe from rejection, then don’t put yourself out there, don’t do anything different from the norm, don’t try to have a voice, and definitely don’t become an artist.

Simply because someone rejects your artwork (or whatever it may be) doesn’t mean that you are worthless. It doesn’t have anything to do with you, and never will. A lot of people avoid thinking about being rejected or losing, but in my opinion it’s a good idea to think about that worst case scenario, and face the fear in your mind.

What if my piece gets rejected? How will I feel? What does it mean?

These could be hard questions, but until you ask yourself and question the validity of your answers, you are going to keep reacting in misery to rejection. The really cool thing about exploring these questions is that you don’t have to react at all, you can respond to the situation however you like.

My answers are less dramatic and devastating since I’ve had a chance to explore this topic and really decide how I want to respond to these questions and this particular type of rejection.

What if my piece gets rejected?

Then it get’s rejected. I pick it up, bring it home and probably sell it at some point in my lifetime. Who knows, it may win a prize at some other art competition… just didn’t suit the juror this time I guess.

How will I feel?

Fine, I have other more important things to focus on.

What does this mean?

Only what I think it means. If I think I’m a failure or a reject, that’s on me. This is an opportunity for me to show myself who I am, by the way I respond. I choose to respond by saying “Well, maybe next time… I got shit to do right now.”

I glanced around one more time, held my breath, and made a run for it. I verbally counted every step as I ascended the stairs with the agility of sloth in running shoes.

Out of breath and elated that I made it to the top, I stood there gleaming in victory. I then proceeded to scrape and bang my way awkwardly through the front door, hitting my head one more time for good measure. I placed the sculpture safely in the gallery lobby, signed it in, and breathed a sigh of relief.

By the way, it was number 13 in the roster… talk about dumb luck.

I had done it. I achieved something I thought was impossible to do on my own, willing to face humiliation and rejection for something I love and believe in… my art, my sense of fun, my freedom to be me.

Had I given up, after that first rejection it would have controlled me. I would have spent the rest of my life being afraid to face rejection, and I would have been filled with “what ifs”.

I don’t believe you actually fail, even if your art doesn’t get in. Even if you get rejected, or lose… I think you only fail if you give up… because that’s the one thing you have control over.

It’s sometimes easy to give up because things might seem hopeless or hard. I didn’t think I could possibly get the sculpture to the gallery on my own, but my belief in dumb luck took over, and I decided to try.

Good thing too, I won Best Of Show. 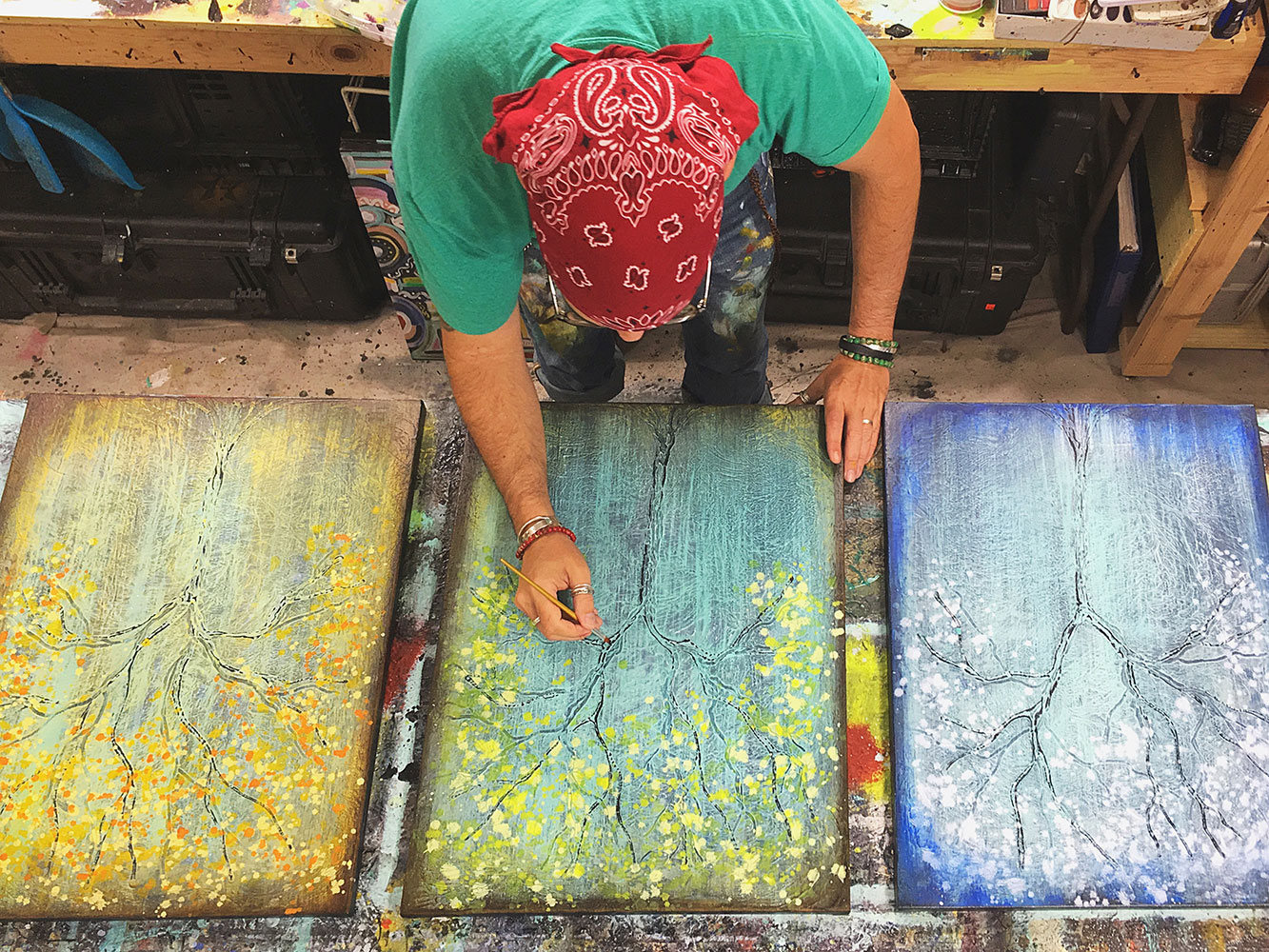 As some of you know, we recently took a nice long impromptu trip to explore the country, see an eclipse, and visit family. A necessity for anyone that is wondering what this whole life thing is about. It’s also for anyone that wants to throw caution to the wind and lose their mind.

Now, I know, I know… why would anyone want to lose their mind?

Well, think about it, when you get stressed out, where does it usually take place? When you are missing something in the moment, because your mind is thinking about your bank statement, where does that take place?

Why do you think people meditate? it’s the best way to train yourself how to shut off your brain and pay attention to what is around you.

I’ll be honest with you, I look forward to times in my life where I am completely out of my mind and enveloped in the moment. Creating art does that for me, taking walks in nature, sitting by a bonfire, star gazing, singing and dancing like a ridiculous buffoon, plus anything else that makes me lose a sense of time.

I focus on that when I’m creating, every piece is my attempt to slow time down and pull the viewer out of their mind and into the moment. To lose themselves in my art, to give them a breather so they can come back from it without the mass jumble of thoughts that preoccupy busy lives.

Well, that’s what I’m attempting, along with giving a sense of empowerment, happiness, and a general sense of well being. I like challenges :). I believe happiness is a result of  just taking a break every once in a while and letting our minds go. Well, it’s just a thought.

I’ll leave you with this, stare at this for a while and go out of your mind.