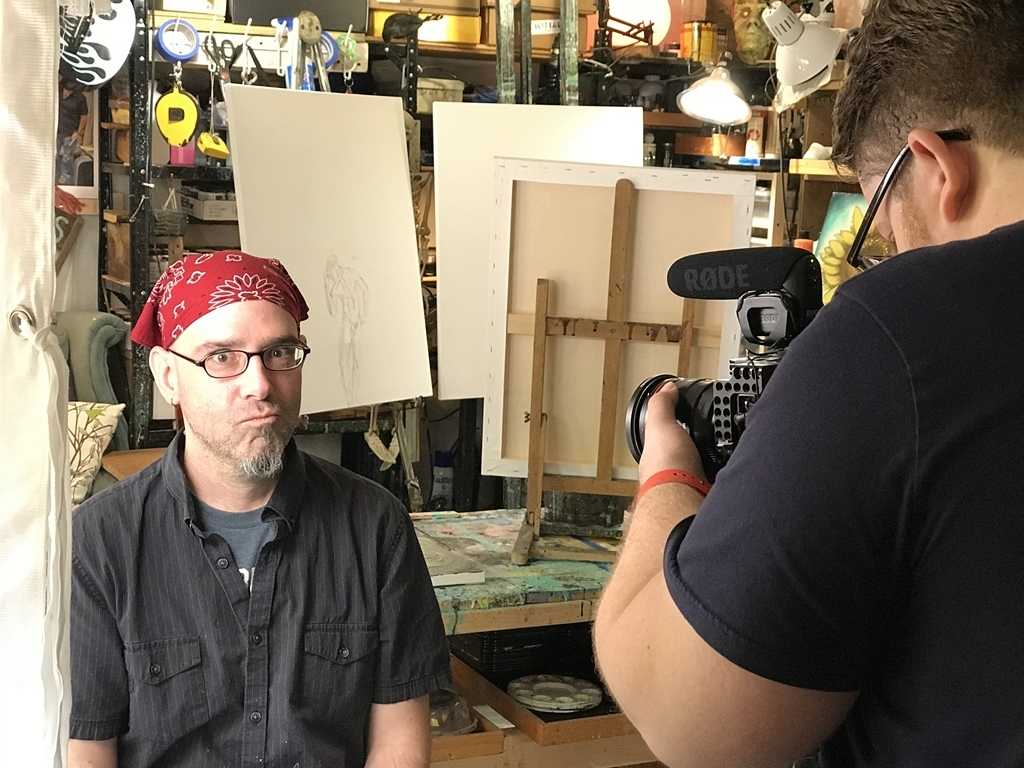 Yesterday morning, as I walked into the kitchen bleary eyed and searching frantically for my coffee cup, it dawned on me that someone would be pointing a camera at my face that day.

Klee was already up and getting ready, she kissed me good morning as she hurried by holding her hair up in a bun.

I pathetically waved back… yeah, I needed coffee.

It’s in those moments, before you are about to embark on something that you’ve never done before, that the little voice of doubt sets in.

We have been interviewed before, but never something like this. A mini documentary? About us?!

As I sat there drinking my coffee I wondered if I would be interesting enough, funny enough, photogenic enough, or even have the ability to string together a coherent sentence.

Klee on the other hand is brilliant at stringing together sentences and getting to the point, and let’s be honest, she is also much more photogenic.

My biggest fear is rambling on and forgetting what I was talking about in the first place. I tend to talk about a subject and go off on tangents, eventually circling around to what we were originally talking about… but sometimes, it’s like I’m standing in the kitchen with the refrigerator door open, wondering why I’m there.

As it turns out the experience was quite amazing, and all my fears melted away once we got started.

Jon Deckert from Vivid Bridge Studios came in with what seemed like an arsenal of compact, high tech, noninvasive equipment that fit our small space in the art studio quite well.

We had met with Jon Deckert and Doug Stanford a few weeks earlier for coffee and to discuss their idea of doing a mini-doc on us. So I had met him before, but only briefly.

I’m not sure what I was expecting, but Jon was awesome. Not only did he know how to wield his equipment with artistic accuracy, but he was amiable and genuine. He made the experience fun and interactive. I mean, it felt like the camera evaporated and I was just sitting there having a pleasant conversation with someone who was interested in what I had to say.

I could clearly see that he had a creative vision of what he wanted to capture, but was also flexible and adaptable to the space and our ideas. His main goal seemed to be to capture the best possible moments he could without interrupting our flow.

I am really excited to see what they come up with at Vivid Bridge Studios, in my opinion their work is creative, beautiful, artistic, and some of the best I’ve seen.

That being said, I did go off on tangents a lot while being interviewed… So they have a lot of video to edit. Luckily, I did manage to string together coherent sentences, kinda.

The mini doc is currently in post production and I’ll let you guys know as soon as that is made available.

By the way, in the old days, I think I would’ve passed up this opportunity simply because once self doubt sets in, it’s easy to talk yourself out of doing something you think is scary. I can honestly say that more often than not the voices of self doubt are wrong, and even when they might be right, it is never as scary as you imagine. So nowadays, I just go for it… and it is ALWAYS worth it.

If you are interested in finding out more about Vivid Bridge Studios, they are Pensacola’s video production & photography studio. They empower businesses, organizations or brands to promote and market their stories through video and photography. Just a really fun and super creative bunch of folks.