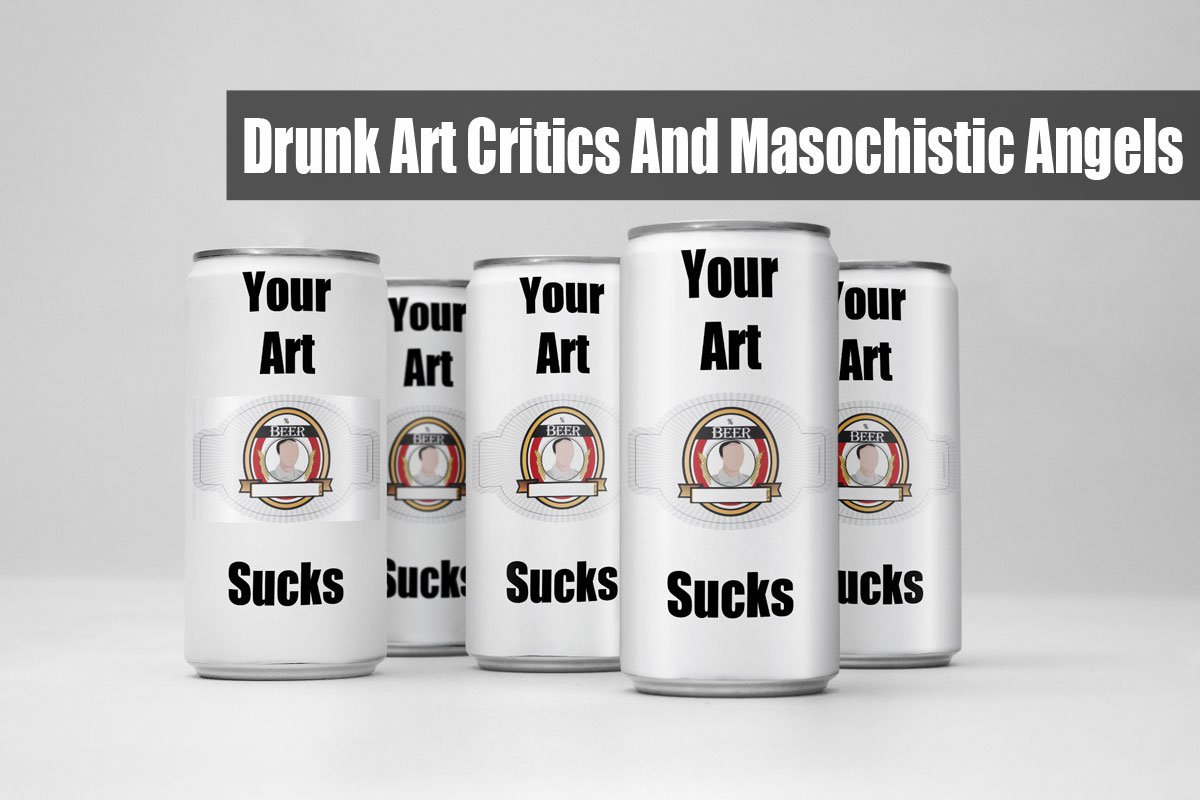 Have you ever had somebody just destroy something you created with an unwelcome verbal assault? That’s what a lot of us artists feel it like when we get any type of negative criticism.

As an artist I expose my emotions to the world in my art. This can be slightly terrifying unless you have a particular mindset when showing your work. I’ve had the benefit now of showing my pieces in just about every venue you can imagine. Some prestigious events and showings, such as my solo show at Marty Campbell Gallery, and some not so prestigious such as the flea markets and drunken parties.

“Some artists that I talk to, believe you have to develop a thick skin in order to be able to take the criticism.”

Personally, I think a thick skin only suppresses hurt emotions and leads to other issues. I’ll give you an example, recently I was showing my pieces at an event and a woman who had been clearly plastered made it a point to make a snide comment about every piece I was exhibiting.

“Is she supposed to be an amputee, is that what you where going for?” Said drunk she.

“Sure… Being an amputee doesn’t make someone less hot.” Said me.

“Guess you would know.” Said me as I walked away.

Admittedly, I could have just walked away without making that last comment. The truth is it wouldn’t have mattered if she was standing in front of a masterpiece or a turd on a stick, she was trying to be funny for her friends and acting like an idiot. That’s not to say that she is an idiot, she’s probably really sweet, but she is definitely not a very good art critic when she’s drunk and trying to be funny.

“I think you can easily get wrapped up in an “us” versus “them” mentality when you are showing something so intimate.”

Had I developed a thick skin, I probably would have just gotten mad under the surface and ignored her. But later on, I would be talking crap about her to my friends and complaining about stupid people who don’t appreciate art, and on and on.

What you have to remember is that everyone sees what they see. You see something special when you look at your art. Someone else looks and they may see something special to them, but they are not seeing the same thing. Reality is subjective and everyone sees the world through their own filter of understanding. That is what makes being an artist such an awesome thing, you get to hear all kinds of different interpretations of the world through your art.

Some are easy to hear because they resonate with you, some don’t and you consider it negative criticism of your work.

“He stared at me for a minute like I was the biggest idiot on the planet and then stormed off.”

I had another guy look at one of my pieces and tell me that my art was just ok, but it could be great if I followed his advice.

“That angel piece is cool, but it could be so much better.” Said drunk he.

“If you had her cutting her wings off, you know, because she hates herself and doesn’t think she deserves them.” Said drunk he.

“Um, that’s not really my thing…” Said me, gesturing to all my paintings.

“Bro, if you did that you would be famous! You Know, she’s a cutter and hates herself, and she’s cutting her wings off and there is blood. She doesn’t think she deserves life, she doesn’t deserve her beauty, so she cuts her face! You do that and I’ll buy it from you! And…” Exclaimed drunk he passionately.

I cut him off at that point.

“Not my thing, but thanks for the input.” Said me as I walked away.

“I’m sure there is a big market for masochistic angels who hate themselves, and he’s probably right, I would make the big time, but it’s not who I am.”

I’m am always aware of how powerful emotions play in creating a piece, something like that would require me to go down an emotional path that I’m not willing to take. That being said, it doesn’t mean he was wrong or stupid, it was his opinion and feeling of what he wanted to see. It has to do with him, not the art itself.

Basically, everyone sees your art through their eyes, 10 billion different interpretations of your work. Whether they are drunk or not. Love it or hate it. Don’t take it personally, it has nothing to do with you. Enjoy the ride, the criticism and remember that if no one was saying anything about your work, that would suck way worse.

If you are a creative person, chances are you’ve asked this question.

I find that if you feel joy constantly as you are refining and tweaking your ideas of what you want to accomplish, then you’re on the right track of inspiration. It is so important for you to get everybody else out of the equation. Just remember that they’ve got their own thing going on; they cannot possibly fully understand your vision. Let them off the hook; stop asking them what they think. Start paying attention to how you feel. Just create what you want to create… A lack of inspiration is nothing more that your focus being on what other people might think of your creation.

This piece is inspired by the freedom of allowing yourself to dream with no inhibitions.

Dreamlike In The Garden Nude Painting By Rafi Perez

The nude is laying at a dreamlike perspective. Thick brushstrokes and different signature layering techniques, create a prestigious, three-dimensional appearance. layers of paint, in the proper lighting, provide a beautiful shadow on her body and background and seemingly change dimensions. This is a work of art that has partially gotten its inspiration from the old masters in nude portraiture, with a contemporary edge.

I wanted to create something beautiful and stunning, yet peaceful.

We spend so much time worrying about the future.

What if, for just a moment, you imagined that life is all happening right now?

Even when it’s happening Right now, you are experiencing it in you mind.

You may be told that you are not being realistic, or that you need to think about tomorrow. The truth is, the only moment we really have is right now, this very moment when you are reading this. Look around you, hear the sounds, look at the colors, feel the temperature and breath… This is happening.

Tomorrow is a figment of your imagination, as is yesterday. Experience this moment now, change it if you don’t like it or milk it for all it’s worth if you do. Right now is your only guarantee so you might as well be here.

Follow Rafi
Follow Klee
Upcoming Events:
Join The Rogue Artist NewsletterStay up to date on what we are up to, upcoming sales, events, offers, new art and jewelry, music, books and more.
Subscribe To Rafi's Weekly Blog Of Inspiration