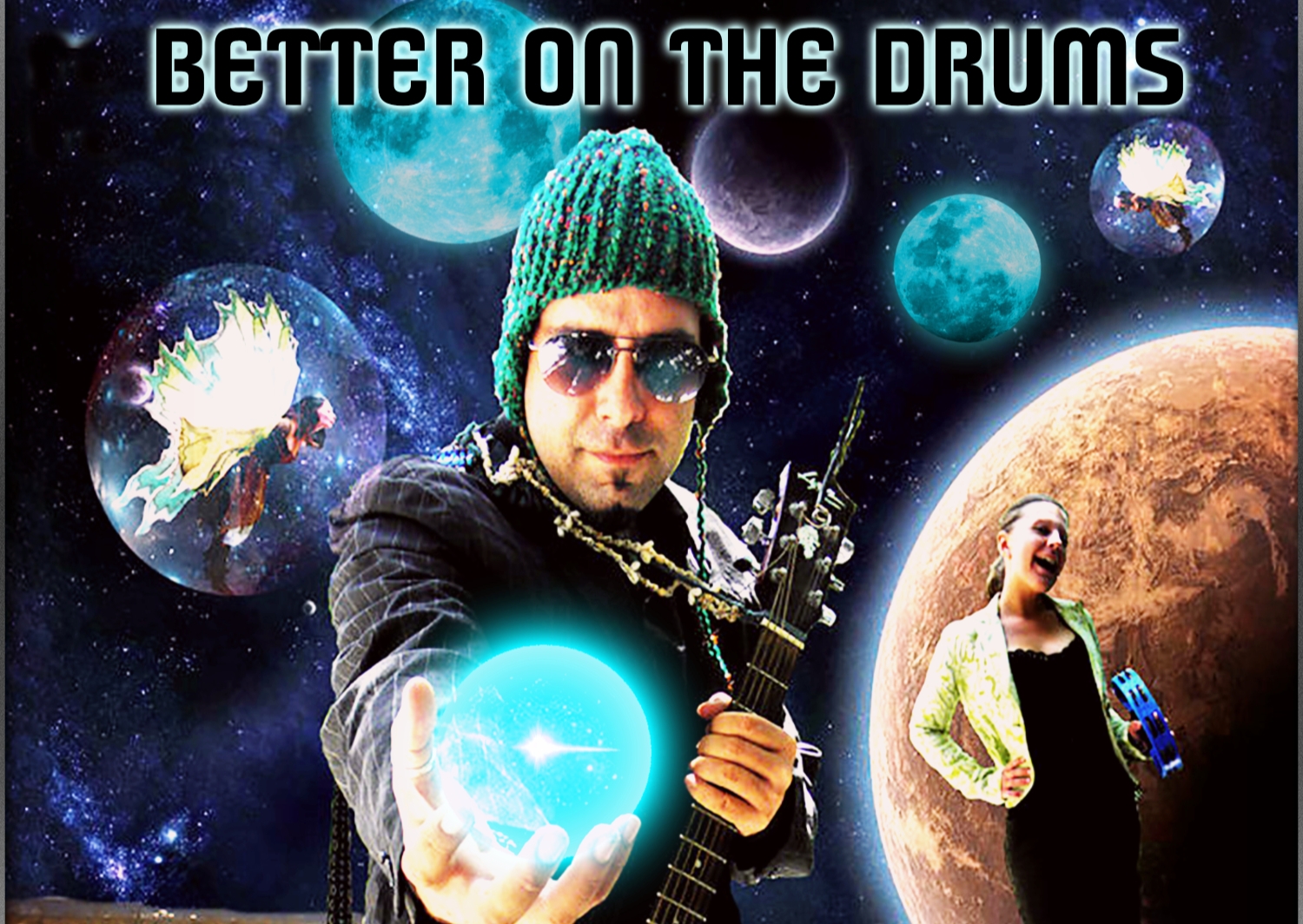 Admittedly, I don’t even know where to begin. My head is absolutely swimming with excitement over our musical news at the time of writing this!

Let me not get ahead of myself…

Some of you may be aware that Rafi and I have a secret band called “Better On The Drums.” Neither of us plays drums. We thought the name would serve as a fun reminder not to take ourselves too seriously and have fun.

Circa 2010, we wrote 9 original songs and recorded them from the road while traveling. We had very little equipment and even less in the way of “sound appropriate” recording spaces, but we didn’t let that stop us.

When the album was finished and polished to the best of our’ then times’ abilities, we released it, yaaayyy!!!

By ‘released it’, I mean we had about a dozen CDs made and then proceeded to ask family and friends if they cared to have a listen and possibly purchase one. (we had no online community or following to speak of just yet).

Spoiler alert, most of our family and friends weren’t all that interested. Shout out to you magical few that were. They cheered us on and supported the music in the early days!

We ended up mostly giving the CDs away to mildly interested humans, and THEN… we sort of shelved the music side of our creativity. Yes, we were busy focusing on the art/jewelry/media side of the business. Still, also, we were disappointed and a little discouraged.

Music has always been important to both me and Rafi. Music was a massive part of both our lives growing up, and you could say we each had the “music in us” as far back as either of us can remember.

From the age of 19, I wrote and performed with bands, played all kinds of incredible shows, and even got to record studio albums. Unknown to most, Rafi moonlighted as a DJ. He treated his energetic audiences to his fun impromptu musical stylings on the mic between songs. He also played music with his brother and encouraged him to pursue it professionally, which he did. Eventually, Rafi taught himself guitar so he could write originals.

When Rafi and I met, I had recently left my bands. I was facing the insecurities and impostor syndrome that came along with the idea of being a “solo artist.” Rafi was facing the insecurities and fears of being a “crappy musician” (his words, not mine). We decided to tackle those fears together and form our two-person band, but it had a rocky beginning, as you read above with our CD release.

I’m going to spare you the extended version of the 10 year narrative between then and now. Most of you are likely aware that we opened our art and jewelry studio, launched our YouTube channel and website. We also pursued countless other creative projects.

And the album? It sat there, waiting for its time. Fortunately, music doesn’t expire if left on a shelf. We’ve recently been writing music again and sharing those 2010 original songs with our Rogue Artist community on Patreon. They’ve been amazing in showing us excitement, support, and encouragement for the music side of our studio.

About a week ago, we decided that it was time to give our album its moment. Yeah, good timing Rafi and Klee… upcoming move, Rogue Artist books to finish, commissions, a large gallery exhibition, and several other things going on… let’s throw the album on the schedule too, because it’s not like we have enough to do!

You know what though? Sometimes you just have to jump on a thing when inspiration is at its strongest. We did. We decided to pursue “Official Global Distribution” for the album.

A couple of problems to sort out, the original audio quality of the album was not going to make the cut for distribution. So we had to remaster it. Unfortunately, we no longer had the original tracks, thanks to a hard drive failure. Miraculously, and with great patience and diligence (and a pretty sweet sound program), we made that happen with what we had. The static and weird ambient background noises from our back-road recordings were sorted, and the album was sound-ready!

The second problem was that neither of us had one iota of knowledge about music distribution. There is so much legal jargon that comes with it. The various types of licensing and ownership registrations and the giant and seemingly endless stream of writer/performer/publisher organizations with their multiple acronyms seemed impossible to navigate.

So we spent our evenings (and the better part of our days, who am I kidding) educating ourselves through articles and videos. There’s a lot to know about releasing music through official channels, but eventually, we felt equipped and ready!

The time came to just do the thing, and we did. We submitted our album for distribution, registered with the necessary organizations, administrators, and acronyms. Then we shit a brick (Rafi typed this in when he edited my writing).

Word on the street was that we might have to wait weeks for approval, so we got emotionally prepared for that.

It wasn’t weeks though, we heard back within 48 hours… that our album “Let Me Sell You A Dream” was approved and being distributed to 150+ platforms all over the world. There are not enough words to explain how that feels, except to say that I’m still beside myself with joy. Our band “Better On The Drums” is not a secret anymore!

So now, we can’t stop there! As I type this, Rafi is busy designing the music side of our website. That way, we can share our album on all the platforms and apps of your choosing! By the time you read this, it will be live and ready!

We also have a collection of brand new original songs that we’re excited to record and release with all of our newfound skills and renewed excitement! Let me not get ahead of myself again though. The original album “Let Me Sell You A Dream” is having its moment. It feels so good.

I want to take a moment to humbly thank our online community of Rogue Artists. Also, you, amazing human reading this. Thank you for your support of our musical endeavors (and our creative endeavors across the board). When we say we don’t know what we’d do without you, we mean it. This album release was made possible by the encouragement and support of our community, and we’re beyond words grateful.

You know Rafi and I can’t leave you without a tidbit of earned wisdom gleaned from the experience. So here’s mine: Never give up on a dream or a creative project that you have burning within you.

Even if you’ve had it sitting on a shelf for ten years, or twenty years, or whatever, you get it.

Even if you don’t know how to make it happen but have a desire to learn as you go. You can give it life, you can make it happen, and when you do… the feeling is indescribable. Do it and know that we’re cheering for you over here!

I know this was long, so if you’re reading this sentence, you are legendary. I’ll let you get on with other things now… including checking out our music if you’d like to!

It is available on Spotify, iTunes, Amazon Music, and more, but you can link to all that on our new music page!

7 thoughts on “Rafi And Klee Music Revolution Is Here!”